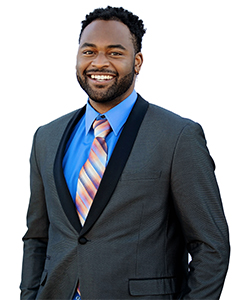 Jaylon Henderson grew up in Houston and moved to Boise in 2018.

He attended Park High School and graduated early in 2015 to focus on his goal of being a major college quarterback. During his time at Park he was an accomplished football and basketball player. In 2019 he became the starting quarterback at Boise State and he led the Broncos to the 2019 Mountain West Conference Championship and he was named Most Valuable Player of the game, a 31-10 win over Hawaii. He graduated from Boise State a short time later with a Bachelors Degree in Business and Finance.

Jaylon is blessed with the heart of a teacher and enjoys spending his time away from the office teaching and training young athletes. His training focus is helping young athletes become better players and better people!

Jaylon loves Idaho! From the moment he arrived he has loved the mountains. His hobbies include snowboarding and just about anything he can do outdoors with his friends.